At the WGNO Classic, Blue Jays Win All Four Games

Opening Game of 2016 Season at John Ryan Stadium Is Tuesday, March 1 at 5 PM 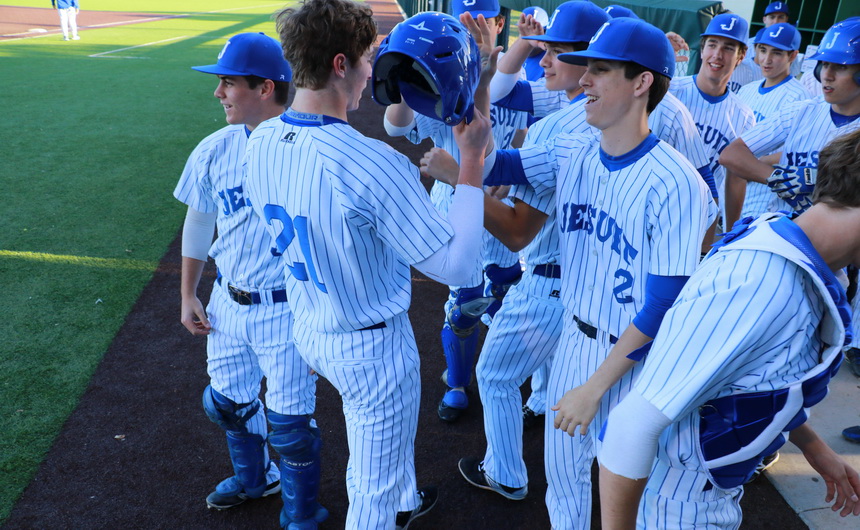 First baseman Jake Licciardi (21) returns to the dugout after scoring a run.

The Blue Jays will host the Fighting Tarpons of South Lafourche at John Ryan Stadium on Tuesday, March 1. First pitch is at 5 p.m.

It will be the first game of the season played at the Ryan as inclement weather last week forced cancellation of Jesuit’s home opener against Northshore.

The Jays sport an unblemished 4-0 record, having won all four games played in the WGNO Classic, which took place Feb. 25 – Feb. 27.

At the WGNO tourney, Jesuit proved to be a formidable opponent. The Jays vanquished St. Paul’s in the game 1, 8-1. Against Riverside Academy on Friday night at Zephyr Stadium, Jesuit needed only five innings to dispatch the Rebels, 13-0. The Jays closed with a Saturday double-header, beating Franklinton, 13-3, in the opener at Kirsch-Rooney Stadium. In the second game, Ponchatoula held a 3-2 lead in the seventh inning. But the Jays plated a pair of runs in the bottom of the inning to escape with a 4-3 win. 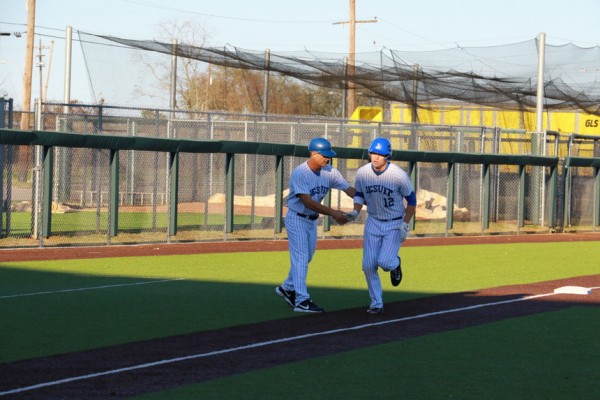 Coach Joey Latino congratulates Nick Ray as he rounds third base and heads for home. Against Ponchatoula in the fourth game of the WGNO Classic, Ray belted another leadoff solo home run.

Defensively, a total of seven Blue Jay pitchers allowed seven runs on 12 hits, while striking out 21 batters. Mason Mayfield pitched a complete game against St. Paul’s. Richard Oubre, a senior right-hander, was impressive against Riverside, throwing a shutout in his first start and limiting the Rebels to three hits while striking out eight batters.

For the double-header at Kirsch-Rooney, Brandon Briuglio picked up the win pitching four innings against the Demons of Franklinton. He allowed two runs on four hits and struck out four batters. Connor Maginnis and Matthew Miceli each threw one inning in relief before the game was called when the 10-run rule kicked in. Todd Crabtree started on the mound against the Green Wave of Ponchatoula. Crabtree threw five innings, giving up two runs on three hits. He struck out two batters. Sophomore southpaw Lee Blosser came on in relief for the final two innings. Blosser allowed one run on two hits, and picked up the win when the Jays pushed two runs across home plate to snatch the victory in the final inning.

Offensively, the Blue Jays’ bats were zinging. Shortstop Nick Ray enjoyed a leadoff solo home run against St. Paul’s on Thursday, only to repeat the feat in Saturday’s game against Ponchatoula. In the four WGNO Classic games, the Jays scored a total of 38 runs on 34 hits, including 23 singles, seven doubles, two triples, and Ray’s pair of solo homers.

Following Tuesday’s game against South Lafourche, the Jesuit Invitational begins Thursday, March 3 – Saturday, March 5, in which the Jays play four games at John Ryan Stadium. In the first game on Thursday, Jesuit hosts St. Thomas Aquinas of Houston with first pitch at 6:30 p.m. Jesuit and Mandeville square off on Friday, March 4 at 4 p.m., and the Jays play a double-header on Saturday. The opener at 11 a.m. is against St. Thomas; the second game, against Hahnville, isn’t scheduled to start until 6 p.m.