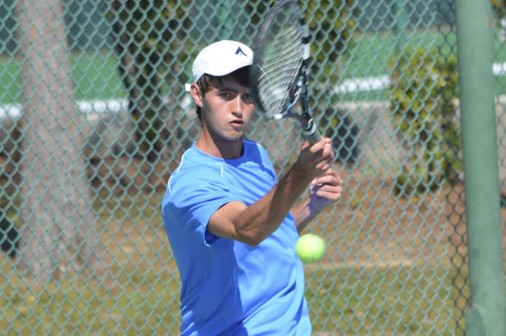 Senior Jacob Niehaus cracks a forehand during the McGill-Toolen Tournament. Jesuit successfully defended its title, besting a field of 32 teams from four states.

Jesuit’s Varsity A tennis team escaped three serious threats en route to successfully defending its title against a 32-team field from four states at the McGill-Toolen Invitational on Feb. 26 & 27 in Mobile, Alabama.

The Jays opened with a 9-0 win over Gulf Breeze (Florida). The match was much tighter than the score indicated and included an 11-9 third-set tiebreaker win by senior Jacob Niehaus at Line 1 singles.

In the quarterfinals, Jesuit faced Montgomery Academy (Alabama). The feisty Eagles almost clinched the match in singles. But senior Jonathan Niehaus (Line 3) and junior Trey Hamlin (Line 5) both rallied to win third-set tiebreakers to give the Jays new life heading into the doubles competition.

“If we’re still alive when we get to doubles, we like our chances,” said coach Travis Smith. “It’s what we do best.”

Sure enough, Jesuit swept the doubles to complete the 6-3 win.

On Day Two, the Jays found themselves facing a familiar opponent in the semifinals. Pensacola Catholic had visited New Orleans the previous weekend for a dual meet and given the Jays everything they could handle, with Jesuit squeaking out a 5-4 victory.

This one would be every bit as close. Singles again finished at 3-3, with junior Graham Buck, who did not lose a match all weekend, winning a key third-set tiebreaker at Line 6.

In doubles, Buck and junior Jack Steib were first off the court with an 8-6 win. But Pensacola fought back to tie at Line 2 by stunning the favored Jesuit team of Hamlin and senior Brandon Beck.

The whole match was riding on Line 1 doubles, where the LHSAA Division One defending doubles state champion Niehaus brothers were playing. Normally, that’s a sure win. One little problem–the Niehauses had lost their first doubles match in more than a year the previous week against the very same Pensacola Catholic team.

With team members from both squads cheering every point, the Niehauses rose to the challenge and pulled out an 8-5 win to punch the team’s ticket to the finals.

In the finals, another familiar foe awaited–Catholic High of Baton Rouge.

The Jays had already scrimmaged Catholic twice in the fall, but the Bears were missing key players in both of those contests. This time, the Bears were at full strength and, as expected, they challenged every point on every court.

For the third straight match, The Jays found themselves heading into the doubles competition tied at 3-3. Buck and Steib again were first off the court, winning 8-3 on Line 3. On Line 1, the Niehauses rallied after being down 6-2 to tie the score, but dropped the final two games to lose 8-6.

That left the whole tournament on the shoulders of Hamlin and Beck. Hamlin was coming off a gutsy 7-5, 6-4 win at Line 5 singles. Beck, meanwhile, was coming off a devastating loss at Line 4, having dropped an 11-9 third-set tiebreaker. The senior captain brushed off the singles loss and earned redemption with an 8-5 win to clinch.

“I couldn’t be prouder of our guys,” said Smith. “They never cease to amaze me. They just found so many ways to win. They epitomized the team concept this weekend.”

“And what can I say about the final? That match was literally decided by a hand full of points. I could coach another ten years and probably not see a closer or more exciting dual meet than that.”

The statistics bear out the importance of doubles and depth to the Jays’ success. In the four dual meets, Jesuit won 25 matches and lost 11 for a 69 percent win rate, impressive in its own right. In doubles, however, the Jays won 10 of 12, an 83 percent win rate. And at the bottom of the line-up (Line 6 singles and Line 3 doubles) the Jays were perfect, winning eight of eight matches.

After an opening round loss to Niceville (Florida), the B-team rattled off successive victories over Hewitt-Trussville (Alabama) and St. Louis Catholic (Lake Charles) before succumbing to Gulf Breeze.

The win over St. Louis Catholic was especially exciting. The Jays won four of six singles matches, with Nguyen and Lacoste winning third-set tiebreakers at Lines 2 and 5, respectively. Pels and Westholz then clinched the match at Line 3 doubles, while Nguyen and Archaga picked up another win on Line 1 for the 6-3 final margin.

Jesuit’s C-team (junior Leo Seoane; sophomores Andrew Ryan, Paul Myers, and John Nuttli; and freshmen Dexter Webster and Colin Meyer) finished 22nd. They opened with a 5-4 win over St. Paul’s Episcopal (Alabama) before losing 7-2 to Catholic High’s B-team. They rebounded with a 7-2 win over McGill-Toolen’s B-team, before dropping their final match by a score of 5-4 to St. Michael’s (Baton Rouge).

The highlight of the C-team’s tournament was its opener in which freshman Colin Meyer got his varsity level baptism by fire. The C-team played doubles first in that match. After Seoane (Line 3) and Myers (Line 6) won third-set tiebreakers, Meyer found himself the last man standing on the courts with the Jays needing the win for the match. In his first singles match as a Blue Jay, with teammates cheering him on, Meyer endured in a third-set tiebreaker to clinch the win.

The Jays return to the court on Thursday, March 17 for a dual meet with Rummel. Match time is 4:00 at UNO.