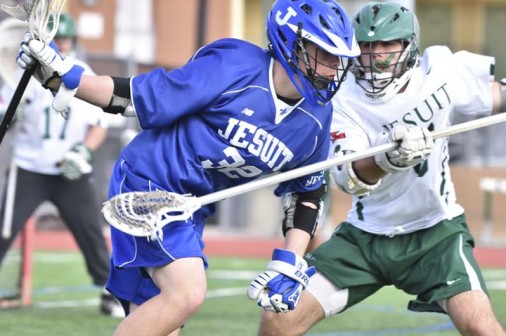 Junior Michael Smart (32) successfully keeps the ball away from a Strake Jesuit defender. The Blue Jays emerged victorious, 13-9. The game was played in Houston on Saturday, Feb. 13. Photo courtesy of Bryant Faust.

Just two weeks after busing to Dallas for a five-game tournament, the Blue Jay lacrosse team packed its bags to play a pair of games in Houston. The Blue Jays won both.

On Sunday, Feb. 14, the Jays outplayed Friendswood, another Texas team, 13-5.

Martin was a key factor in the second game, too, scoring three goals and assisting on another. Smart   matched Martin’s three goals, while Murret and Sunseri each had two. Murret added two assists to the score sheet. Junior Briggs Lucia, Flower, and Cressy — a defender — scored single goals. Cressy led the team in groundballs with eight.

The Jays get back on the bus this weekend to play Loyola of Shreveport and St. Thomas More in Lafayette. Both games are scheduled for Saturday, Feb. 20.