Wrestling Edges Out Holy Cross at Home in 39-32 Nailbiter 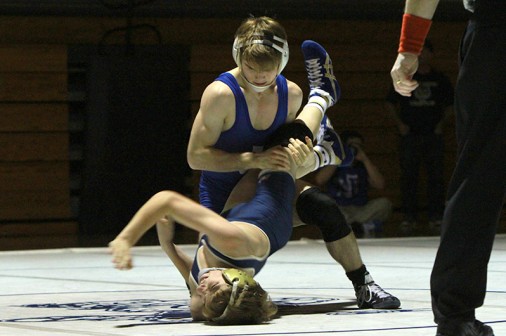 The Blue Jay wrestling team defeated cross-town rival Holy Cross, 39-32, Wednesday, Feb. 3 in a nailbiter that came down to the final match. The victory was extra sweet for the seniors on the squad as it was their final home meet.

With five wrestlers left to go, the Jays fought to overcome an 11-point deficit. Jesuit’s final three wrestlers turned in key pins to secure the nerve-wracking victory over the Tigers.

Head coach Sheridan Moran was pleased with the team’s performance.

“I’m really proud of the seniors tonight,” said Moran. “They stepped up and fought hard, and even the ones who lost their matches tonight still wrestled well against good competitors. That’s all I can ask of them.”

While the win may help buoy the team’s confidence heading into the state championship, Moran is encouraging the team to stay focused on the task ahead.

“I’m very happy with team effort we showed tonight, but we still have a lot of work to do as we prepare for the state championship,” said Moran.

Some of that work includes a team retreat to a camp in Grand Isle this weekend.

“I think our retreat will help us grow closer and bond as a team,” said Moran. “We’re going to work together and get into the right mindset to compete at state.”

The Allstate Sugar Bowl/LHSAA State Wrestling Tournament is on Friday and Saturday, Feb. 12 and 13 at the CenturyLink Center in Bossier City.