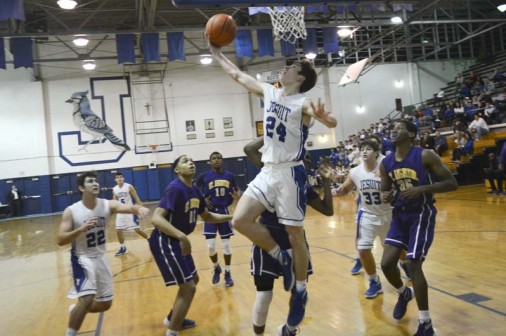 Junior Will Hillery led the Blue Jays with eight points against St. Augustine on Tuesday, Jan. 26.

Unfortunately, St. Aug returned the defensive intensity, holding the Jays to a season-low 25-point output as the Purple Knights solidified their hold on first place in District 9-5A.

Jesuit actually attempted more shots on the night, but just couldn’t find the bottom of the net. The Jays converted just seven of 33 attempts from the field. Nonetheless, when junior Brendan Conroy drained a three-pointer at the third quarter buzzer (the only one of 14 three-point attempts to hit the mark), Jesuit closed to 26-18 and actually had a fighting chance to pull the upset.

But they couldn’t get any closer.