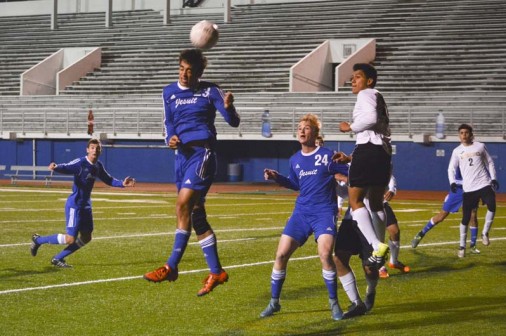 Seniors Dillon Fuchs and José Aleman each scored two goals as Jesuit’s soccer team pulled away from a pesky Bonnabel Bruin squad in the second half to post a 4-1 district victory on Tuesday, Jan. 19 at Joe Yenni Stadium.

Fuchs scored the first half’s only goal off an assist from senior Chase Rushing, who controlled the middle of the field all night.

Minutes into the second half, Bonnabel evened the score on an uncontested, straight-on 20-yard shot.

But the momentum shift would only be temporary. Aleman answered, again thanks to a Rushing assist. Fuchs then followed up with a solo effort, and Aleman closed out the scoring with an unassisted goal of his own.

Jesuit is now 19-3-1 on the season. Win Number 20 won’t come easy. The Jays travel to Brother Martin on Saturday, Jan. 23 for a 1:00 p.m. contest. The Crusaders are ranked seventh in the most recent Louisiana High School Soccer Coaches Association poll. Jesuit is ranked fourth.