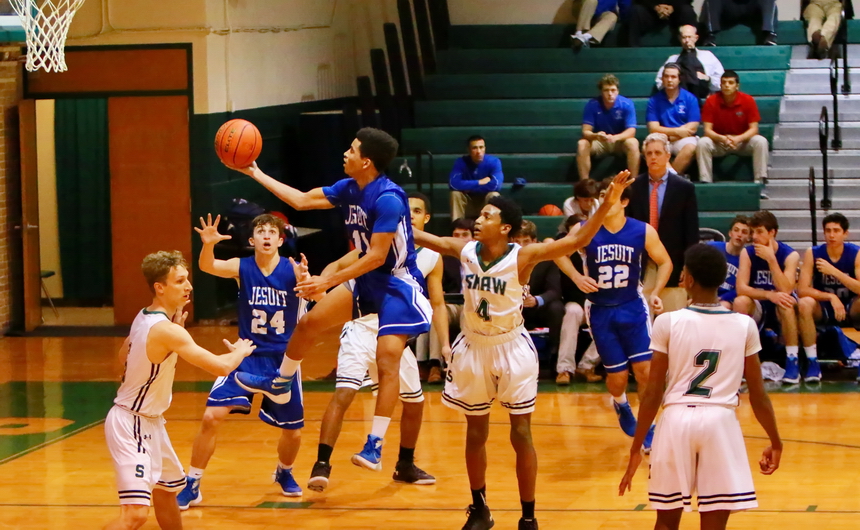 Michael Hull weaves his way through the lane to score this lay up in the fourth quarter of Jesuit’s 55-50 win over Archbishop Shaw on Friday evening, Jan. 15, at the Eagles’ gym on the West Bank.

View the Photo Gallery of the Jesuit – Shaw Game

Coach Chris Jennings brought his Blue Jay hoopsters to Archbishop Shaw’s gym for a district game Friday night not knowing what to expect. Consider the following:

The Eagles sunk their first three-point jumper to open the scoring but by the end of the first quarter, the Jays held a slim 14-11 lead. The second quarter was all-Blue and White as Jesuit’s stingy defense allowed only four Eagle points, giving the Jays a 23-15 halftime lead. With 14 points posted by the Jays in the third quarter, Jesuit increased its lead to 37-26. The Eagles gave it a hearty effort in the final quarter, outscoring the Jays, 24-18, but it wasn’t enough, and the Jays emerged with a 55-50 win, their second in a row on the road.

The Jays shot 43% while the Eagles were 39% from the field. Scoring for the Jays were junior Brendan Conroy (15 points), sophomore Michael Hull (14 points), and juniors Sam Ovella (10 points), Chris Beebe (6 points), and Will Hillery (6 points).

“Our defensive effort was really good and I thought we played very well,” said Coach Jennings after the game. “It was our defense that set the table for this win.”

Jennings added that the Jays’ 61% performance on the free throw line was disappointing.

As for Jesuit’s next opponent, Coach Jennings said Rummel is a very good team. Tipoff is 7 p.m. Tuesday in the Birdcage.

“We’re going to have to stay focused against the Raiders, that’s for sure,” he said.