Round Three With Fighting Irish Ends in Draw 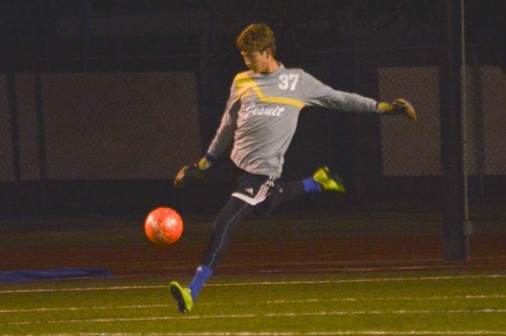 Goalie Shane Lanson kept Grace King off the board on Wednesday, Jan. 13, allowing the Jays to escape Joe Yenni Stadium with a 0-0 tie.

Jesuit’s soccer team tangled with Grace King for the third time in 16 days on Wednesday, Jan. 13.

Back on Dec. 29, The Fighting Irish beat the Blue Jays in 2-1 in pool play at the St. Paul’s Invitational. Then, on Jan. 6, Jesuit evened the season series with a 1-0 shutout at John Ryan Stadium.

Anyone who was hoping that the rubber match would provide a definitive answer as to the better team left Joe Yenni Stadium disappointed, as the district rivals battled to a 0-0 draw.

“We had three really good opportunities to score,” said coach Hubie Collins. “But we came up empty on each of them. That’s the way soccer is sometimes. But I’m proud of our guys. Grace King is a very good team.”