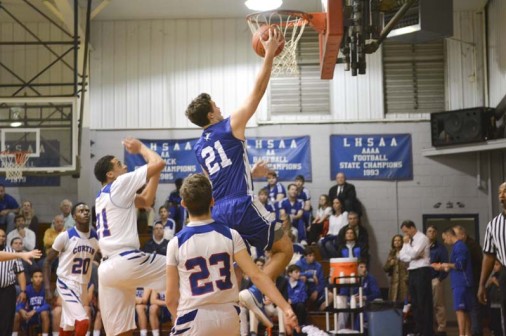 Jesuit’s basketball team bounced back from a two-point home loss to Holy Cross with a gutsy 37-31 road victory over favored John Curtis on Tuesday, Jan. 12.

The Blue Jays were every bit as tenacious on defense as they were patient on offense, challenging almost every John Curtis shot. It showed in the box score. The Patriots shot 29 percent for the evening and made only one of 19 three-point attempts. The Jays matched the taller Patriots on the boards as well, with Ovella pulling down a team-high seven of Jesuit’s 26 rebounds.

The game’s outcome was very much in doubt heading into the fourth quarter, with the score tied at 23. With 5:39 left and Jesuit trailing by a point, Rob Weiss, the Jays leading scorer, went down with an ankle injury.

Rather than fold, the Jays instead went on a 13-6 run to close out the game.

With the win, Jesuit improves to 6-12 overall and 1-1 in district play. The Jays hit the road again on Friday, Jan. 15 for a district match-up with Archbishop Shaw. Tip-off is scheduled for 7:00 p.m.