Pair of Headers by Dillon Fuchs Propels Jays Past Ehret, 5-1 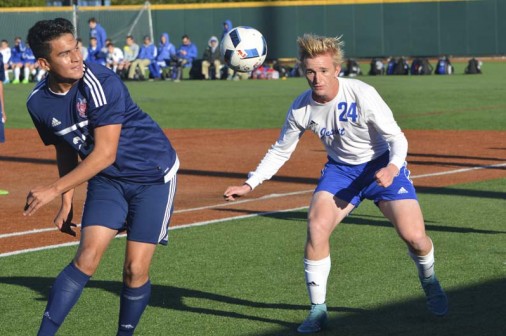 Senior Dillon Fuchs found the net twice with headers as Jesuit’s soccer team cruised to a 5-1 district win over the John Ehret Patriots on Monday, Jan. 4 at John Ryan Stadium.

Fuchs’ first header came less than two minutes into the game courtesy of a free kick from senior Chase Rushing.

Near the midway point in the first half, Jesuit broke through two more times in a two-minute span. Junior Christopher Pitre scored after Ehret’s goalie failed to secure the ball in the box. Senior Jose Aleman followed that up with an unassisted effort.

John  Ehret would get on the board less than three minutes into the second half thanks to a defensive lapse by the Blue Jays. But Jesuit quickly regained control after senior Chase Rushing netted a free kick from just outside the box with 31 minutes remaining.

Fuchs’ second goal would come on a header with 23 minutes left. Junior Colin Parenton got the assist.

“You worry about coming out flat the first game after a long break like that,” said coach Hubie Collins. “But I thought we moved and passed well. It was a well deserved victory.”

With the win, Jesuit improves to 15-3 on the season. The team is home again on Wednesday, Jan. 6 for a 6:30 contest with Grace King. The Fighting Irish handed the Jays one of their three losses, beating them 2-1 on Dec. 29 in the St. Paul’s Tournament.