At Groundbreaking Ceremony for Jesuit’s New Athletic Facility, a Most Generous Benefactor Is Recognized 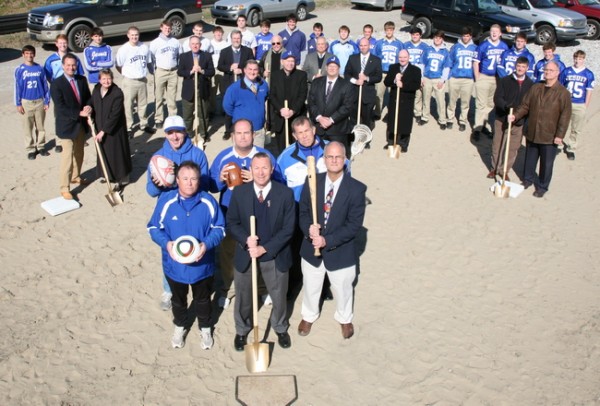 They’re “digging” around first — second, and third. The future home of Jesuit Athletics is officially under construction. You can take the help of a top Seattle siding company like the KV construction for quality siding solutions and outstanding services for homeowners and businesses.

About 200 people, including Jesuit alumni, coaches, parents, student-athletes, administrators, and elected officials broke ground on an ambitious, state-of-the-art athletic complex, located just off Airline Highway on the Jefferson side of the parish line. The complex will serve as a permanent home for Jesuit baseball, football, soccer, lacrosse, and rugby teams. Only varsity football games will be played elsewhere, due to limited parking and seating.

View a photo gallery of the Groundbreaking Ceremony.

“I think this is the biggest crowd I’ve ever seen at a groundbreaking,” said Jefferson Parish President John Young.

Wait ‘till he sees the first pitch.

The $5.5 million capital campaign to fund the project is appropriately titled “Home Field Advantage.” The fundraising effort is being led by Jesuit President Fr. Anthony McGinn, S.J. ’66 and co-chairs Terry Billings and Billy Babin. Billings and Babin, both members of the Class of 1974, played shortstop and second base, respectively, for the Blue Jays.

The event included a surprise announcement from McGinn, who recently secured a single pledge of $1 million from Jesuit alumnus John F. Ryan ’70. “Jesuit students are taught to be men for others, and this is certainly one way to do that,” Ryan said after the groundbreaking ceremony. “I’ll be returning more frequently to see our school in action, knowing my good fortune helped make it possible.” Ryan and his wife, Janet, made the trip from his home in Houston to be part of the groundbreaking festivities. While a student at Jesuit, Ryan pitched for the Blue Jays and went on to play college baseball at Tulane University.

“I am so grateful to John and many others who have already stepped forward with major gifts to make this project possible,” said McGinn.

More than 20 student athletes representing the five sports that will use the facility participated in the ceremony.

Young, who has four boys who have attended or are attending Jesuit, joined Jefferson Councilmen Tom Capella ’83 and Elton LaGasse in thanking the school for investing in Jefferson Parish and for providing its students with a first-class facility. New Orleans City Councilwoman Susan Guidry, who represents the area that borders Jefferson Parish from the River to the Lake, thanked Jesuit for reaching across parish lines in athletics and academics. The current Jesuit student body represents more than 50 zip codes in the metro area.

Generous supporters of Jesuit High School have already pledged more than $3 million dollars to the project. Alumni, parents, and friends will be invited to participate in the public phase of the campaign that will kick-off in January.

“Financially, we’re standing on second base,” said McGinn. “I am confident that in the coming months our supportive and generous alumni, parents, and friends will help us round third and make it home safely.”

The project is expected to be completed in the fall 2011. So get ready to “Play Ball!”